Back in 1965, your choice for baseball bats was fairly straight-forward. Did you prefer the Louisville Slugger like Mickey Mantle used or the Adirondack like Willie Mays. Both were made from select ash. Professional baseball was dominated by a few big bat companies.

At the turn of the 21st century, Barry Bonds home run exploits put the spotlight on the bat he was using, and his bat was made out of maple.

Birch, which is more flexible like ash and dense like maple, is starting to be picked up by a growing number of big leaguers. Birch recently passed ash as the number two type of bat in major league baseball.

END_OF_DOCUMENT_TOKEN_TO_BE_REPLACED

Your baseball glove is an extension of your baseball-self, you want to love it.

The gloves we use today have evolved from no gloves at all in the 19th century. Some of the best defensive stars of their generation (or all-time) have become legends while using what we would now consider unusable.

END_OF_DOCUMENT_TOKEN_TO_BE_REPLACED

Anyone who plays baseball knows that a better grip is always helpful. Batting gloves have become more grippier, the lizard skin tape that now adorns many bats adds some gripiness to bats, but what about good old-fashioned pine tar?

END_OF_DOCUMENT_TOKEN_TO_BE_REPLACED 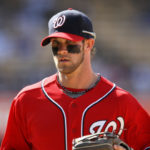 Have you ever wondered if you should be using eye black on those bright, sunny North Carolina afternoons? The short answer, according to Dr. Brian M. DeBroff, the lead author of a Yale study on the subject, it doesn’t hurt.