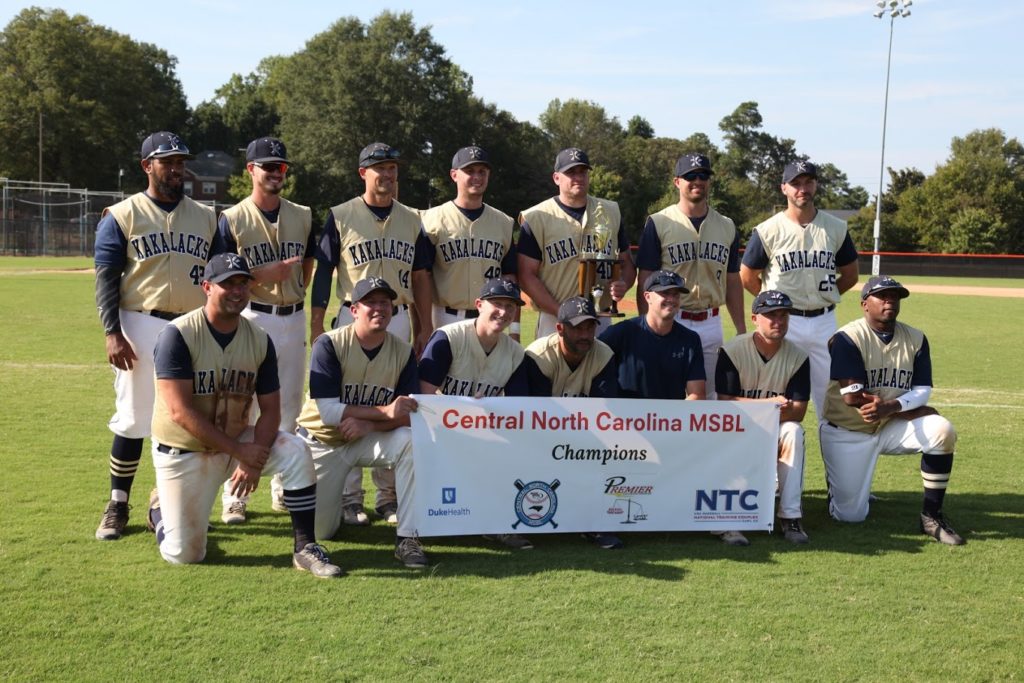 The #1 seed 18+ Kakalacks defend their title vs. the #2 seed 18+ Triangle Rangers in two games to win their ninth 18+ Central North Carolina MSBL Championship.

After a tough round one playoff game, winning a close one 8-7 vs. the Woodpeckers, the Kaks cruised past the Bulls in the second round, winning 13-1.

Game 1 of the Championship Series took place under the lights on a Friday night at Ting Stadium, where the Kaks were met with some unfortunate pre-game adversity when starter, Freddy Foshay broke his arm warming up in the bullpen.

The Kaks had to make a quick decision despite being slightly shaken up and turned to Jeff Webb to pick up the pitching duties. Webb commenced pitching a complete game gem giving up 1 run on 3 hits and 2 strikeouts.

Offensively, the Kaks were playing inspired, putting up 7 runs between the first two frames. Leading the way at the plate were Paul Regan (4-4 with 3 RBIs) and Richard Cates (3-5 with 1 RBI) as the Kaks cruised in Game 1, winning 12-1.

In game 2 of the series, the Kaks continued to hit the ball well, this time behind contributions from Greg Smith (3-5 with two 2Bs, Richard Cates (3-5 with 2 RBIs) and Adam Martin (4-5 with 3 RBIs).

The Kaks were up 10-3 through 6 innings, but the Rangers rallied in the 7th & 8th innings to pull within one run. Contributions from Paul Regan, who hit two 2Bs late in the game, helped push the Kaks out in front for good.

Manager Adrian Matlock got the start on the mound, and pitched well in the first 6 innings, keeping the Rangers off-balance, giving up 3 runs on 6 hits and 4 strikeouts. OB Taylor pitched the 7th & 8th innings, where the Rangers mounted their comeback. The Kaks turned to Jeff Webb once again in the 9th, who shut the door, as the Kakalacks won game 2 to clinch the Championship, 13-10.