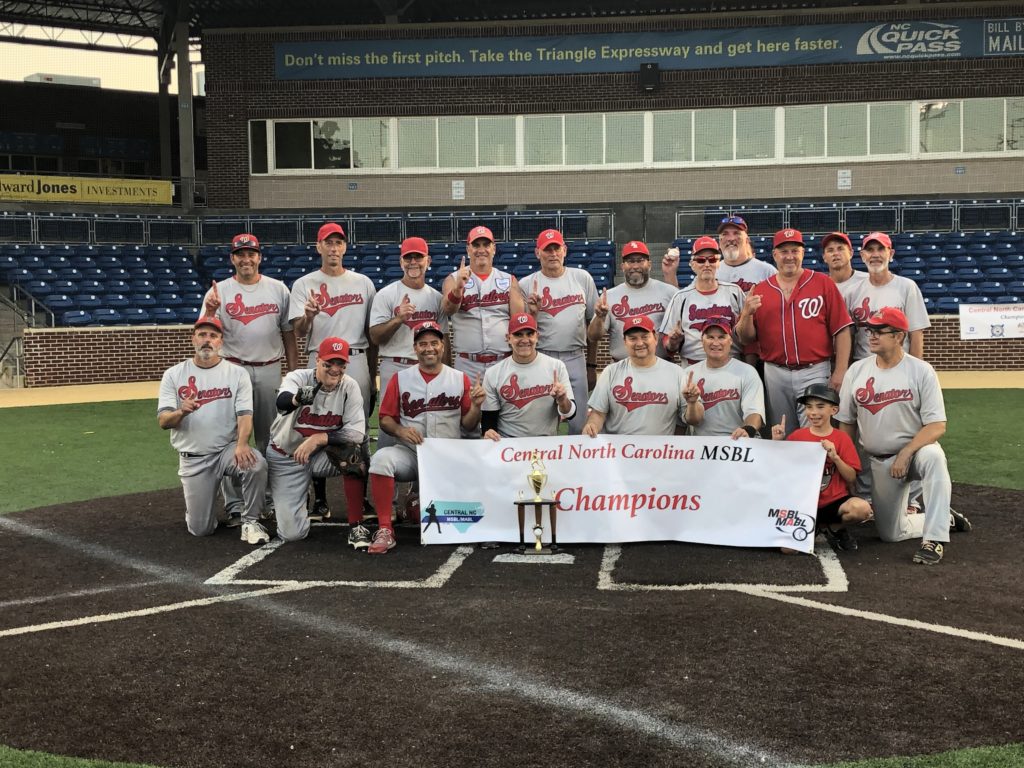 The Holly Springs Senators repeated as the champions in the over 50 division in a head to head match up with the Alamance Giants. The Senators and the Giants also faced off in last year’s championship series with the Senators coming out on top. This year was a 2 game sweep for the Senators.

The championship series began on a Saturday afternoon at the beautiful USA Baseball Complex in Cary, NC. The first quarterfinal game saw the Red’s defeat the Red Sox to advance to Sunday’s semifinal against the number one seed Senator’s. The second qualifier that day was the Fayetteville Met’s beating the Cubs to advance the semifinal game against the Giants.

On Sunday at USA Baseball the Senator’s defeated the Reds and the Giants made it past the Met’s to set up a repeat of last year’s championship series.

Game 1 was a low scoring affair for the first six innings with Mark Simpson of the Senator’s and Pat Ferrick from the Giants on the mound keeping hitters off balance but the Senator’s bats broke out in the seventh inning and the final score was 15-3 Senators. Simpson pitched five innings of eight-hit ball with Dave Halley finishing off the Giants with two innings of no-hit relief to seal the win.

Game 2 was played at Ting Stadium in Holly Springs and was another low scoring game with Rich Lee of the Senator’s and Paul Burmeister of the Giant’s dueling head to head with the Senator’s playing error-free baseball to secure a 6-2 victory. Both Lee and Burmeister pitched a complete game for their teams.

The managers of the two finalists were Rob Isbell for the Senators and Bob Patterson of the Giants and both deserve a world of credit for getting their teams to back-to-back finals with Patterson taking the Giants to their third finals in a row.