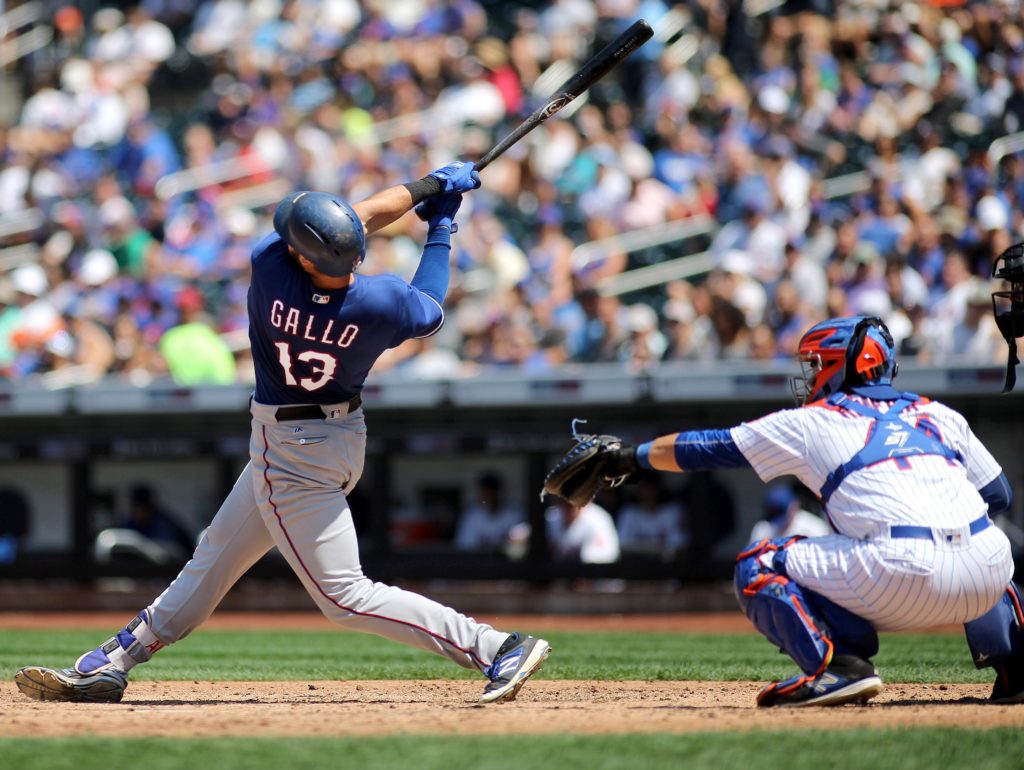 Even a casual fan has heard all the talk about ideal launch angle over the past few years. I wondered how it could impact a normal men’s league player.

If you’re over 18 years old, you probably remember being taught to have a nice level swing. Although even the great Ted Williams, one of the best hitters of all time, said you should have a slight uppercut to match the downward trajectory of the ball that the pitcher was throwing.

No matter what age you are, there are times you square up a fastball perfectly on the sweet spot but hit a ground ball. This part of the discussion is called simple geometry.

If you’ve shot a basketball, you know that you can’t just throw the ball in a straight line to score, you need to arc it over the rim to get it through the hoop.

Hitting a home run in baseball is the same thing, except the “hoop” is hundreds of feet away. If you hit the ball perpendicular to the ground, it will never get over a fence, because at your belt buckle the ball is only about 3 feet off the ground, not to mention gravity. Your best bet for a base hit is to get the ball past the infield.

So we watch the Home Run Derby before Major League Baseball’s All-Star game in amazement at the towering monster shots. Nobody likes watching the grounders or strikeouts.

None of us are ever going to hit a ball as hard as Barry Bonds, Giancarlo Stanton, Josh Donaldson or Yoenis Céspedes. But we can learn where we are and what launch angle is best for us.

We would all like to be the guy hitting the walk-off homers for our team. If you have a swing made for distance, you may want to invest some time in figuring out how to get a little more lift into your swing.

Over the off-season I’ve been working out at Baseball Rebellion in Durham. Besides a very clean, well-lit facility they also have HitTrax set up in 4 of the batting cages. That allows me to see the results each time I hit the ball, regardless of if I’m doing tee work, soft-toss, hitting off the pitching machine or regular batting practice with a hitting coach

That feedback has shown me two important things. The max exit velocity that I can put on a ball is about 85 mph, although my average exit velocity is between 75 and 80 mph. That means that for me to hit the ball as far as possible I need an average launch angle of about 32°.

According to slightly more advanced mathematics, I can predict that if I barrel up a nice pitch and turn it around with those inputs it will travel about 331 feet during a warm summer day.

Luckily someone much smarter than me had already figured out all the batted ball launch calculations so I could just manipulate them in a spreadsheet.

The graphics were interesting to play with. If I am trying to get to 300 feet with my 85 mph exit velocity, I need a launch angle between 19° and 46°. What’s interesting is the height of those two hits is radically different. In the screenshots below I’m using the “Mid” calculations and Braves Field in Atlanta.

You can click on these images to enlarge them.

Although my metrics won’t allow me to jack one out of Atlanta’s SunTrust Field (I’d still be 50 feet short of the wall) it would mean a nice 331 foot hit in the CNCMSBL 50+ division, and maybe even sneak over a short fence at some high school fields.

Most of the balls I end up tracking are nowhere near 330 feet, I end up hitting a lot of them 240-270 feet which translates to a pretty average fly out, if not a sad pop up. For a hitter like me, that means I have to adjust my thinking a little bit, everything being perfect on every hit isn’t realistic.

What about all the times I’ll only be getting an exit velocity of 70 or 75 mph? Now I don’t want to hit lazy fly balls, I want hits over the shortstop’s and falling in before the left fielder can close in on it.

If the shortstop is standing on the edge of the outfield grass, he is about 155 feet away from home plate. Assuming he can jump a little, I need to make sure the ball is at least 10 feet high when it gets to that point. Here comes more math problems!

What is the optimal launch angle for those hits? Would a line drive at 5° work?

A line drive at 10 degrees will probably be caught by a shortstop playing back. You need just a little bit higher launch angle.

Adding 5 additional degrees to the ball’s launch angle means now you’re on first base instead of heading back to the dugout. Those are the swing changes worth working on.

Using the interactive tool on the MLB website to see where my hits might end up was also really interesting.

Now if I look at my max exit velocity and launch angle for maximum distance here’s what I see. A lot more pink dots (outs).

If you look closely at the text below the field you’ll see that it has calculated what the MLB batting average was for hits that match that launch angle (LA) and exit velocity (EV), which shows a 671 point difference between the two scenarios.

Keep in mind that we don’t have MLB outfielders roaming our outfields, so some of those fly balls would probably fall in for hits.

Using the Statcast data, the nerds at 538 wrote a good article that goes into the same phenomenon that is shown above.

Meanwhile, the success of a ball struck at a more intermediate angle is extremely sensitive to its exit velocity. For instance, at a launch angle of about 25 degrees,3 run values can vary sharply depending on how fast the ball leaves the bat. Low exit velocities tend to result in short-hoppers to the infielders, which are easy outs. But as batters hit the ball slightly harder, those liners get progressively stronger, eventually sailing over infielders’ heads for bloop singles. Then the run value drops again, as those line drives begin to travel within reach of the outfielders. At a certain point, though, run value skyrockets again as hard-hit balls become doubles and, eventually, home runs.

The New Science of Hitting on fivethirtyeight.com

Speed of the Pitch

It’s logical to ask what impact the speed of the pitcher has on a batted ball’s exit velocity. It comes up a lot during the annual Home Run Derby where fans postulate about how much further those balls would travel if the pitcher was throwing 90 instead of 60.

Dr. Nathan had also explained during DiamondKinetics Science of Baseball Live Tweet conversation during the HR Derby that while each mph of pitch speed adds 1 ft. to the distance, each mph of bat speed adds 1.2 mph of exit speed.

Diamond Kinetics then wraps all that math up into a nice easy to understand package.

If you’re not practicing someplace that has HitTrax or some other built-in system to track all you metrics, there are fairly inexpensive DIY solutions.

For less than $150 you can invest in a Blast sensor that attaches to the knob of your bat and gives to the data from your swings.

You can use it on any bat and even let the app know when you change bats to see if the metrics that you’re tracking change depending on bat length, weight or even turning.

Here’s a sample of a few swings from my own set-up.

Because the device is attached to the bat, it can’t tell me exit velocity or launch angle, because it can’t see the ball. But it can tell me a lot of other useful data like swing path, attack angle, vertical angle, how fast my bat is moving, how quickly I’m rotating, how much I’m rotating, etc. If you’re interested in all the details, see the information at the Blast site.

If you were thinking about the calculations from Dr. Nathan above where he says Bat Speed x 1.2 = Exit Velocity, so was I. That means that for my bat speed of 62.7 in the first row, that ball should have an exit velocity of about 75 MPH, while 65.1 MPH of Bat Speed correlates to an Exit Velocity of 78 MPH.

If I want to set a goal of an exit velocity of 95 MPH, it would mean I would have to whit the Bat Speed up closer to 79 MPH to join the sluggers.

If you want to also buy the Blast Vision app, then you can use your phone to capture ball flight information and get the launch angle, exit velocity and distance information and it also combines with the other physical data the sensor is collecting on the know of the bat to determine where on the field the ball would be landing. You’ll finally be able to hit into a net and know if you’re a power hitter or just below your league average.

Here’s a clip of one of my teammates from last year trying out the app during a casual practice session.

The Blast device is not the only one out there doing this. There is also Zepp, DiamondKinetics and Easton.